Thomas A P Van Leeuwen, The Magic Stove: Barry, Soyer and The Reform Club or How a Great Chef Helped to Create a Great Building. 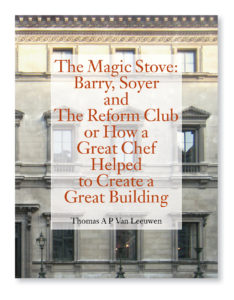 This little book –ninety-one pages and fifty-six illustrations- with the lengthy title The Magic Stove: Barry, Soyer and The Reform Club or How a Great Chef Helped to Create a Great Building explores the architecture and technology of the London Reform Club, a noted but generally misinterpreted work of Charles Barry, Britain’s most famous unknown nineteenth-century architect. Barry’s fame is mainly based on the Houses of Parliament, his best known work. In fact, they are much more than just “known”, they are so famous that there is hardly another building in the world that has the same emblematic status. They appear in films, in news presentations, on postage stamps, in picture postcards and in almost anything that proclaims: “this is Great Britain”. Equally famous, but more in the transient way of a modern celebrity, and certainly not “known” is Highclere Castle, the notorious emplacement of the globally viewed television series Downton Abbey. A greater fame is hard to achieve and Charles Barry was the architect. The scale on which Barry worked, the sheer number and size of the projects, is staggering. Even during the period he was chief architect of the Parliament buildings, he had found time to design one of the grandest of London club houses–also functioning as location for (block-buster) films and documentaries-the Reform Club (1837) on Pall Mall. So much work in a limited time span had proven to be too much for the great man. He died at an early age, 65 years old, of exhaustion.

Still, as is so often the case, popular artists are seldom respected, let alone admired, especially not by those who had made it their business to know about architecture. Proof of this deplorable fact is that no serious or even non-serious monograph of Barry exists. Barry was not an innovator, one so believed, or an artistic architect, and thus was not worth exploration. But appearances are deceptive. Although from the outside The Reform Club building looks traditional and all too formal, once inside an exciting world unfolds of light and technological innovations. Especially the kitchen, designed by the Club’s chef-de-cuisine Alexis Soyer, drew large crowds at the time of the opening in 1841 and was the talk of the town. For the first time gas was introduced as the source of heating, rather than light, the kitchen machinery was driven by a steam engine and experiments with forced ventilation were attempted.

In this elegantly presented and richly illustrated study, attention is given to the building as a social and technological system. César Daly, contemporary of Barry and architectural critic was fascinated by the inner workings of the building, which he compared to “almost a living being” (“presque un corps vivant”).

Many rare and unpublished illustrations, thirty-four out of fifty-six in colour, help to underpin this argument.

Earlier essays by Thomas A P on Soyer, Barry and The Reform Club have appeared in Cabinet Magazine issue 37, 2010, “Hot on the Trail”. http://www.cabinetmagazine.org/issues/37/vanleeuwen.php and Hunch no 13, 2009 “The Magic Stove”.