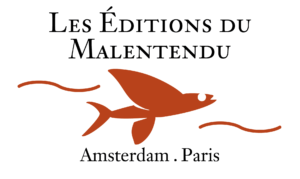 The Malentendu logo is inspired by the Flying Fish, one of Nature’s most ambiguous creatures. Its hyper-energetic propulsion system enables it to swim when at ease and fly – run, rather – when in haste, an equivocal situation leading to possible situations of Malentendu. Its scientific (also French) name is Exocet. During the 1982 Falklands conflict the Argentine navy fired French-made NATO Exocet missiles; true to the creature’s nature, they leapt at their British targets like airborne torpedoes. Standard procedures led to the Exocets’ being identified as friendly fire, a misunderstanding with horrendous consequences: bravely leading the flotilla towards its friendly foe, HMS Sheffield went down with one flying fish in her belly. This incident made the Flying Fish the perfect heraldic symbol for our publishing house.

Tragic consequences aside, the sinking of ships by opposing ships is almost a law of nature: ships and torpedoes are cousins, often designed and built by the same maker.

Robert Fulton (1765–1815) is well known as the builder of the first American steamboat. He was born in America, self-taught first as a jeweller and miniature painter, then as a barber, and finally as a marine engineer. Powering ships by steam propulsion had already been demonstrated in Europe, where Patrick Miller designed and successfully sailed the first steamboat on a Scottish loch in 1788. This feat inspired Fulton to cross the ocean, but instead of studying the possibilities of steam propulsion he anticipated its further potential and invented the Torpedo. To great public interest, tests were conducted on the southeast coast of England. The London Picture Magazine recalled: “The first explosion of a torpedo occurred in the year 1805. The inventor was Robert Foulton [sic]. The experiment was carried out on the 15th of October, 1805, in the presence of Mr. Pitt, then Prime Minister, in the Bay of Walmer, about a mile from Walmer Castle, which was then Mr. Pitt’s residence. The ship which served for the purpose was a 200 ton Danish brig, the ‘Dorothee’. At 4.40 p.m. the torpedo was launched, and eighteen minutes after, the ship was seen to be lifted, in the midst of an enormous column of water, 6 ft. above the surface, and blown in two. Twenty seconds later nothing could be seen of her but a few floating timbers.” [ See illustration]

After returning to the United States Fulton began designing his own version of the steamboat. Its trial run took place on the Hudson River on August 9, 1807, and was followed by the historic 150-mile pioneer trip of the New York-Albany line. Strange though it was, it was not illogical that Fulton, before setting out to deploy steamboats in his native America, had devised the means to destroy them. Indeed, it was a perverse turn of history that the torpedo preceded the steamboat, that with unmistakable Demiurgical wisdom Fulton had provided his steamboat with its own nemesis, an efficient and pitiless emergency brake in case it were to run amok.